ATTENTION: Just a friendly reminder that these will be our upcoming hours:

Have a safe and fun holiday, from our family to yours. 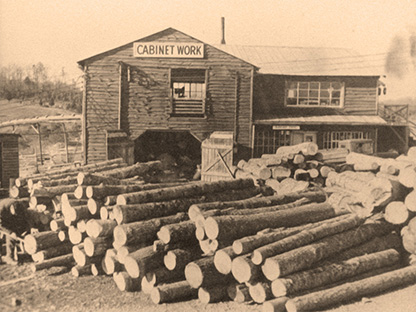 For well over a 125 years, associated with wood in one form or another. In 1892, the hills of East Tennessee provided the beginning of the family tradition when Fate Tindell began producing lumber from his steam-powered sawmill. The father of 16 children began his sawmill by buying and cutting timber in Knox, Union and Anderson counties, moving his sawmill from one timber tract to another. By the time of the Depression, Mr. Tindell had acquired a large amount of land including tracts in the Halls area of Knoxville. With the establishment of good roads, he set up a permanent sawmill on a tract in Halls. The Depression took its toll and he lost most of his other properties to satisfy notes that he had co-signed, but he managed to keep the sawmill operation.

In 1938, Francis Tindell joined his father in the saw milling business and continued the business upon the forced retirement of Fate due to the amputation of both legs caused by diabetes. A planing mill was added in 1948 and Francis began selling lumber to builders in the Knoxville area.

During the 1950's, Paul Tindell joined his father in the business and the transition from a sawmill operation to a building material business began to evolve. Tindell's Building Supply was established. Appropriately, the first building material center was located "across the road" from the sawmill.

In 1960, the second sales and supply center was opened in nearby Maynardville. This officially transferred the tradition of growth from saw milling to building materials. Upon Francis' death in 1964, his other son, Carl, joined his brother at Tindell's. A cousin, Richard Tindell, joined the company during the 60's.

During the 80's, Tindell's merged the Maynardville center with the Halls facility and started installing garage doors for its customers. Later, installation of fireplaces and vinyl siding was added. In 1989, the original sales and service center was moved into a newly constructed building "across the road." The first Tindell "lumber yard center" is now (2019) the Corporate Office.

In 1993 a new facility was acquired in the Karns area of Knoxville to house our expanding truss manufacturing plant. A Millwork Division was added in 1995. In 1997 Installed Sales added the services of insulation and punch-out. Our fourth retail facility was opened in Sevierville in 1997 and the International Division exported building materials to Korea. Our President, Carl Tindell, served as Chairman of the National Lumber and Building Material Dealers Association during 1997.

A decline in the new home construction market as well as an unusually rainy first six months of 1998 caused Tindell's to reduce its projected sales and streamline its operations to meet this reduction. However, starting in July of 1998, sales steadily increased with October being the highest month. The company's market plan, developed during the last half of 1998, proposed to position Tindell's for growth during 1999 via a customer relationship management approach.

In 2001 Johan van Tilburg joined Tindell's as President of the Company. From 2001 through 2003, Tindell's grew steadily and sales reached record levels.

During 2003, construction was completed for a new Millwork warehouse located at the upper end of the Halls location. In 2005, a new location was opened in Marysville and 2006 saw the addition of a store in Cleveland thru aquisition(Robinson Building Center).

The The very next year 2007 brought about the â€œgreat housing depressionâ€ and sales declined for the next 5 years as the country struggled with the housing boom aftermath. Tindells shuttered locations, executed mass layoffs and employees took pay cuts as the company struggled to survive. 2012 marked the end of the housing disaster that had cost us all dearly, AIG failed, several of the big banks collapsed and government intervention was required to keep the economy alive.

Since 2012 Tindells has enjoyed year-over-year steady growth, 2017 marked our 125th year in business and we celebrated extensively; a special logo was made to celebrate this happening and several vehicles were wrapped in this logo. The rebuilding period 2012 thru 2019 witnessed a complete overhaul of the Truss plant, a new interior door machine at Millwork and extensive fleet renewal. During this period, ownership of the company transferred to Johan van Tilburg.

We look forward to serving the East TN Valley for the next 125 years and to continue building relationships that will last a lifetime.